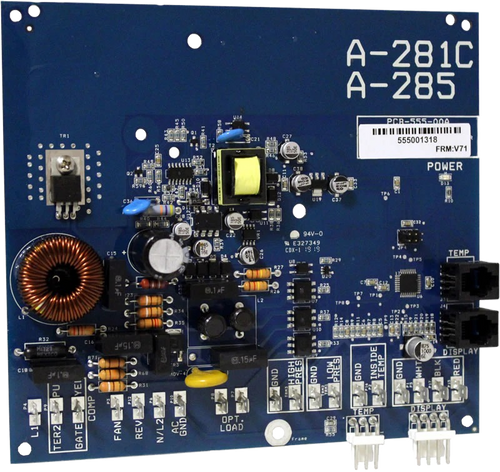 The A-281C Control Board is part of a legacy DX cabin control system sold in the mid-1990s. This is a newly manufactured, footprint-compatible replacement that operates identically. The display interface can either be the legacy, 4-conductor cable with a Molex connector on each end, or it can be the newer 6-conductor RJ-12 cable with straight-through wiring.

This board was used in Cruisair systems in the 90’s and early 2000’s. Original boards were 7” x 6.25” [17.8cm x 15.9cm]. It featured a four-pin display jack and three pin sensor jack that usually protruded out an opening in the enclosure. There was a distinctive line of spade connectors along one side of the board running the entire length.

Original boards were typically marked with the number 42403 on the board and typically had either A-281C or A285 marked as well. This board replaces Cruisair part number 42403 and Dometic part number 701800007 control boards. It also features the newer six pin display connector so it can be used to upgrade the display to the SMXIIir without using an adapter.

A-281 C Power Logic Control Board:

From the same Collection

From the same Manufacturer